January 19, 2019 – In a village Brailov near Vinnitsa, the village council head disrupted two Ukrainian Orthodox Church’s (Moscow Patriarchate)1 traditional water consecration worships on the feast of Baptism, that annually takes place at the local river. This was reported by the official website of the Ukrainian Orthodox Church (Moscow Patriarchate) Vinnitsa Diocese and translated by the Union of Orthodox Journalists

The head of the village council, Valery Resident, accompanied by a priest of different Christian denomination from a neighbouring village, showed up at the place of the public worship on a river’s bank and started acting defiantly and insulting the priest of Ukranian Orthodox Church (Moscow Patriarchate) who was performing the water consecration rite. Mr Resident yelled through the megaphone insulting terms, stressing that nobody had invited the Ukrainian Orthodox Chruch (Moscow Patriarchate) priest here. In two hours, the head of the village appeared at a different location of Ukranian Orthodox Church (Moscow Patriarchate) water consecration worship accompanied by a priest of a newly formed OCU2. Together, they tried to prevent the priest from finishing the worship and shouting: “this is our water, not yours,” and “who gave you the right to bless the water in reservoirs?”

The actions of the village head caused outrage in the Orthodox community of Brailov. Moreover, “they [actions of the Local Authorities’ representative – ed.] give a reason for serious concerns as in a secular state an official allows himself to intervene in purely church affairs; and he does it in a defiant and insulting manner.” – states the Vinnitsa Diocese. 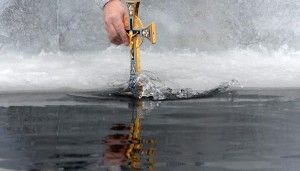 Jan. 12, 2019 – Commentary of Archbishop Feodosiy, Chairman of the Church Court of the Kiev Diocese (Orthodox Church – Moscow Patriarchate), about the State interference into Church Affairs.