Sunday Divine Liturgy was prevented and the church hijacked in the presence of Local Authorities and the police.

March 10, 2019 – Supporters of the OCU1 prevented Divine Liturgy and seized the St. Archangel Michael Church in the village of Berezhnitsa, Chernovtsy region, in presence of the police and the head of a village, reports the press service of the Chernovtsy-Bukovina Diocese of the canonical Ukrainian Orthodox Church2 (UOC) on its Facebook page; translated by Union of Orthodox Journalists.

Early in the morning, the initiative group of the OCU gathered on the church territory and did not allow the UOC’s parishioners and priest Konstantin, the rector of the church, to hold the Divine Liturgy. Then the supporters cut off the locks of the Church, set new locks and thus seized the Church. Vasily Solomko, the head of the Banilov village council, and the police were present at the incident.

Previously, on March 7 2019, at about 7:00, the assault of the Church began, as a result of which the parishioners received bodily injuries. The confrontation ended only on the night of March 8, after the head of the village council sealed the temple. As a result, a general agreement was reached between the UOC religious community, the head of the village of Banilov Vasily Solomko and OCU supporters: the parties agreed that on Sunday, March 10, Father Konstantin would serve the Divine Liturgy in the church and perform all further services until the court decided otherwise. 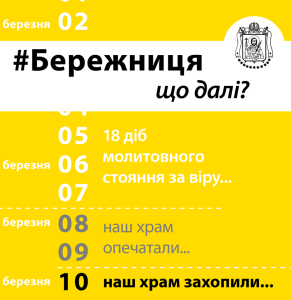