3 killed in Muslim terrorist attack on orthodox church in Grozny

May 21, 2018. Three innocent people, including two Internal Affairs officers, were killed when Muslim terrorists attempted to capture the Church of the Archangel Michael in Grozny, the capital city of the Russian Chechen Republic, during the Saturday evening service.

The four militants were also killed by Special Ops forces: “The militants infiltrated the Church of the Archangel Michael to capture the parishioners. As a result of the quickly executed special operation, all four of the militants were killed,” Chechen head Ramzan Kadyrov told Interfax-Religion on Saturday.

The men entered the church with small arms, knives, axes, and plastic bottles with fuel mixtures. Two police officers guarding the church, Vladimir Gorskov and Kairat Akhmetov, were injured by the terrorists at the entrance to the church, repots TASS. Their “courageous actions made it possible to immediately receive information about what was happening around the church,” the Chechen head explained.

Rector Fr. Sergei Abasov explains that the gathered faithful heard shouts of “Allahu Akhbar!” and two loud shots. They rushed to close the doors, although one parishioner was unfortunately killed. The terrorists tried to break into the church, although the parishioners were able to resist until special operations officers arrived.

The injured police officers had expressed a desire to be baptized not long before. One of them, Vladimir, was baptized in the hospital by Fr. Sergei, while the second was undergoing a complicated operation.

The deceased parishioner Artemy had come to Grozny from Uzbekistan in search of his children. He had confessed and communed just days before the on feast of the holy Ascension. “He was sitting in church all day, reading Holy Scripture, praying on his prayer rope. His prayer rope was in his hand when they killed him… He departed to the Lord with the name of Christ on his lips,” Fr. Sergei said.

Kadyrov arrived on the scene immediately, taking control of the special operation, which only took a few minutes. Unfortunately, another two officers were killed during the operation. “They courageously stood in the way of the bandits. I have commanded to help the families of those who perished,” Kadyrov stated.

“There is operational information that the militants’ orders were received by some Western country,” Kadyrov said on Saturday.

“I again very responsibly declare, that it is possible to try to commit some actions aimed at undermining the safety of residents of Grozny and other settlements, but anyone taking even the first step on this path will be immediately eliminated,” Kadyrov added.

Law enforcement agencies quickly established the identity of all four militants, who were all residents of nearby villages and regions.

His Holiness Patriarch Kirill of Moscow and All Russia has expressed his condolences to His Eminence Archbishop Varlaam of Makhachkala and Grozny, whose diocese included the recent Dagestan tragedy as well, the local clergy and the faithful, and the family and friends of the victims, noting that he received the news of the attack with great sorrow. He noted the heroism of the officers who were injured and those who gave their lives, and called upon the Lord to grant speedy recovery and comfort to all involved.

Abp. Varlaam also expressed his condolences to the relatives of the victims, offering his prayers for the speedy recovery of the injured, and the blessed reposed of those who perished. 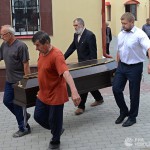