June 4, 2020. The Chernihiv Eparchy told of a false report in the local newspaper that the community, which had won all the courts against the OCU, lost its registration certificate.

On May 14, 2020, “Chernihivshchyna” regional newspaper published an announcement about the loss of the registration certificate of the Holy Protection temple of the UOC of the village of Kovpyta of the Chernigov Region, which was regarded by the Chernihiv and Novgorod-Seversky Eparchy of the UOC as another attempt to illegally re-register the community.

“Parishioners of the religious community of the Holy Protection church of Kovpyta village of the Ukrainian Orthodox Church do not know who posted this bogus message,” the diocesan press service said. “Since the above document has not been lost, none of the representatives of the church’s community could contact the editorial office of the Chernihivshchyna newspaper or whatever newspaper.”

The Chernihiv diocesan administration believes that the purpose of publishing a false announcement is an attempt to illegally re-register the community, due to which competent authorities were involved.

The UOJ website recalls that on May 20, 2020, the Supreme Court of Ukraine, as part of the panel of judges of the Cassation Economic Court, decided to return the UOC temple in honor of the Protection of the Mother of God in the village of Kovpyta, Chernihiv Region, which was seized in 2019 by the activists of the OCU. This is the third court decision made in favor of the Holy Protection temple of the UOC. 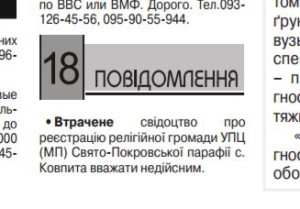