Ukrainian Orthodox Bishop objected to the propaganda against traditional family

August 14, 2015. Archbishop Luka of Zaporizhia and Melitopol of the Ukrainian Orthodox Church (Moscow Patriarchate) addressed to the Mayor of Zaporizhia because of an outdoor advertising in municipal property. This advertising was about to show how men “win hatred with love”.

The Archbishop expressed the opposition of the faithful Orthodox residents of Zaporizhia and asked from the Mayor to protect them from moral decay and degradation that leads to sin in the religious sense and to decline of culture and civilization in the secular sense. He continued by underlined that they are against all that destroys family values, against manifestations and propaganda of sin.

The Mayor’s office answered to the Archbishop Luka that the municipal authorities have no right to interfere with the form and content of outdoor advertising and this rule is enshrined in Article 16 of the Law of Ukraine on Advertising.

Diocese of Zaporizhia will continue seeking legal ways to remove social advertisings, which make propaganda against the traditional family from the city streets. 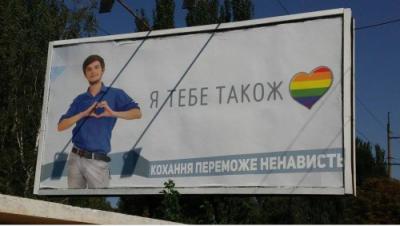