The representative of the UGCC incites hatred for UOC

February 26, 2020. The representative of the UGCC Petro Kryk called on his subscribers to support the initiative to ban the Ukrainian Orthodox Church.

The hierarch of the Ukrainian Greek Catholic Church Petro Kryk incites hatred towards the Ukrainian Orthodox Church, urging readers of his Facebook page to support unknown ATO soldiers and ban the UOC in Ukraine.

The bishop of the UGCC published on his page a post inciting religious hatred: “The ATO soldiers are demanding that the UOC-MP should be banned in Ukraine. Shall we support it?”

According to him, the Greek Catholic’s post indicates that the head of the Uniates, Sviatoslav Shevchuk, regularly deceives, arguing that the UGCC wants to live with everyone in peace since clerics and even bishops of this organization incite sectarian strife.

“In fact, this bishop, who had previously demanded with the same hatred that Zelensky’s supporters should leave his Facebook friends, showed the essence and gut of the UGCC – it is a fierce hatred to all who disagree with the Uniates both in political and religious space,” says the blogger. 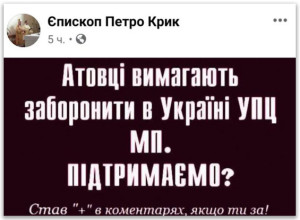