The main building of the stone church was not affected by the fire. However, the wooden church and two premises of the Sunday School had completely burned out. According to the statement of priest Fedor Yanovsky, the video cameras captured a stranger in a black balaclava with a rucksack, and two bottles in hands. At first, the stranger was lavishing unknown liquid on the outer walls of the wooden temple and the school, then set fire and disappeared from the back yard.

As a matter of fact, it was not the first time the temple in Uhtomka had been attacked. On the 14th-15th of January 2014 a group of people damaged the fence, knocked over the security car and pulled out the foundation piles for the stone church construction, crashed windows. On the 15th of November 2014 an intruder brought a bag of building materials to the temple door and set it on fire, but the fire was detected on time and had not spread far.

Video and photo documents from the REN TV channel and IZ.ru 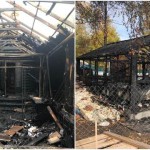