June 21, 2016. Kamensky (former Dneprodzerzhinsky) City Council does not recommend inviting the UOC priests to public events, as reports UOJ. A particular attention is paid to schools. The head of the Municipality’s Education and Science Directorate calls to carry out “awareness-raising”.

In the explanatory part of the document it is stated that there are parishes of the Kiev Patriarchate, Ukrainian Greek-Catholic and Roman-Catholic Churches in the city. “I believe it relevant and appropriate to the state policy of Ukraine to invite representatives of namely these parishes to public holidays and events”, municipality secretary Alexandr Zalevsky writes in the document.

As for experts, they evaluate such initiatives as grave violations of the Constitution.

“Pursuant to article 35 of the Constitution, the Church and religious organizations are separated from the state, while schools are separated from the Church, says protopriest Alexandr Bahov, head of the UOC Law Department. – Therefore, invitations of representatives of religious organizations are not at all mandatory and do not fall under jurisdiction of the Department for Education and the City Council on the whole. Besides, I’d like to note that according to art. 5 “On Freedom of Conscience and Religious Organizations”, all religious institutions are equal before law and granting any preferences or, on the contrary, imposing restrictions are not to be permitted. In this case, judging from the document, there is a separation between “good” and “bad” religious organizations. Herewith unreliable and unverified information is used as a rationale”.

The City Council secretary stresses that the UOC priests allegedly call to separatism. Besides, they do not blame Russia as an aggressor country.

“The authors affirm the Pochaev and Kiev Pechersk Lavra were purportedly distributing separatist literature despite the fact this information had been refuted both by the church authorities and the respective organizations who’d been looking into the matter, underscores protopriest Alexandr Bahov. – It is also not clear why they demand that the UOC should accuse somebody or admit an aggressor. The point is according to the regulations of the international and national legislation the UOC is not a subject of international relations. For that reason It has no right to give Its assessment of actions of other states: accuse or not accuse, admit or not admit an aggressor, an invader, or declare war. Besides, our civil servants turn a blind eye to the fact the UOC offers Its help to the displaced persons, injured, and victims’ families.  Within dioceses there are opened rehabilitation and spiritual support centers for the ATO participants. All the above information is available at the official sites and easy to check. There is a reference in the letter to such “prohibitions” being in line with the state policy. Since when have violations of the religious organizations’ rights become a state policy?”

This is a pure religious discrimination. The civil servant is likely to have trimmed his sails to the wind from Kiev and decided “to rush to hell before his father”, says the expert. – This proves a large-scale and risky game of Kiev authorities who have been trying to place the UOC outside the law. Yet it’s worth recalling religious wars, for example, in XVI century in France, which swept away one third of the country’s population. And a five-year religious war between Catholics and Protestants resulted in the population being unable to recover from that massacre for another 200 years. All this poses a huge threat.”

Discriminatory documents of the City Council are dated May 26 and 31. Earlier a similar initiative distinguished  Minister of Home Affairs Arsen Avakov, who issued an order № 205 in March on introducing chaplain’s service in the National Guard. Inter alia, the document enshrines that the military unit command “does not allow (restrict the activities) of priests who belong to the religious organizations whose centers are located on the aggressor state’s territory”.

Documents from the UOJ. 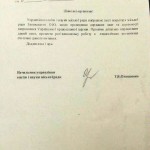 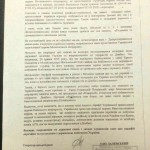