December 10, 2015. In the Central park of Vladimir region (Russia), Orthodox sculptures were demolished, as the website Interfax-religion reports.

According to the national tele and radio company “Russia Vladimir“, ten Orthodox sculptures made of white stone have been destroyed with a bulldozer, under the excuse that they were dirty. Broken into pieces, the sculptures then have thrown to the incinerator under a pile of rebar. The issue was not discussed at the city monumental commission beforehand.

Video document from regional news on the national tele and radio company “Russia Vladimir” broadcast on the 10.12.2015

Photo documents of the sculptures from “Russia Vladimir” braodcast 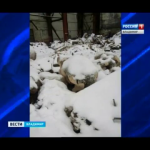 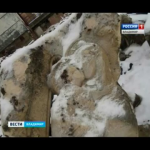 Photo documents of the sculptures before destruction from vladimirgid.ru