July 18, 2017. The desecration of Orthodox churches, monasteries, and holy sites has become common practice in modern-day Albania. The latest scandal was caused by a report of the TV station Top Channel, reports AgionOros.ru.

Inviting the audience to a jazz festival organized by the singer Eda Zari, the broadcast showed a music clip filmed inside an Orthodox church. The footage showed a jazz group playing with their backs turned to the holy altar.

It is believed that the filming took place at the Church of the Dormition of the Theotokos in Berat in southern Albania. The church was confiscated by authorities and is being used as a museum of Byzantine art. Visitors to the church-museum testify that the guides regularly enter into the altar and pick up and show visitors the sacred vessels and holy relics.

In a number of cases, the confiscation of valuables and the destruction of holy sites have been carried out by the state itself. In August 2013, hired government thugs attacked an Orthodox Church in the southern Albanian town of Përmet, smashing icons and crosses and beating up worshipers. In early 2015, the government unilaterally decided to destroy the fencing around the Tirana Cathedral of the Resurrection of Christ.

In March 2016, more than 300 clergy and laity gathered and requested that the government return churches, monasteries, and sacred objects and sites confiscated from the Church and profaned. The request was especially provoked by an earlier profanation of the same Dormition church in Berat, when photos were shot showing young girls advertising wedding dresses on the episcopal throne, and in front of the Royal Doors and iconostasis. Similar pictures were also taken at an Orthodox church in Elbasan.

The request notes the deleterious effect of such actions for the whole country, and that such blasphemies occur only against the Orthodox Church in Albania:

This is obviously a sacrilege and an insult to religious feelings. Certainly, such occurrences spoil the religious harmony for which our country boasts. Also, we highlight that such repeated offensive actions do not “promote” the cultural heritage of our country. It is worth mentioning the fact that such sacrilegious acts have not been committed towards any cult objects of the other religious communities in Albania. Therefore we protest because the state bodies, which still hold possession of the sacred sites and objects, even after twenty-five years of democracy in the country, give permission to desecrate the holy and gracious objects of the Orthodox Church.

We ask for the law no. 10057 Article 22/2 dated on 22/01/2009 on the “Agreement between the Government of the Republic of Albania and the Albanian Orthodox Church” to be finally applied and all the holy churches, monasteries, holy relics, icons and sacred objects of worship to be returned with no delay or excuses to the Orthodox Church. They are highly respected, honored and are sacred to all the Orthodox people around the world but also to the faithful in Albania.

Photo documents from the http://agionoros.ru/docs/2709.htm 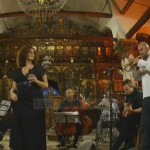