Orthodox church of Elijah the Prophet robbed in Moscow

July 30, 2018. The temple of Elijah the Prophet in Cherkizovo in the east of Moscow was robbed on the night from the 29th to 30th of July by unknown persons, after the rector of the church, deputy administrator of the affairs of the Moscow Patriarchate, Archimandrite Savva (Tutunov).

“It happened tonight.” At midnight the temple was inspected by the guard on duty, and everything was fine, “the rector said. The fact of infiltration was discovered early in the morning. Attackers, apparently, entered the temple through one of the windows, breaking the lattice, added the rector. “From three honored icons – the Kazan Icon of the Mother of God, the icon of the Virgin “Unexpected Joy” and the icons of the Blessed Matron of Moscow – they took off the decorations that the believers donated for their help in praying for these icons.” They also carried the contents of two boxes for donations, ” said Archimandrite Savva.

Donations were collected for the needs of the Sunday school and flowers for the decoration of the temple, which was already preparing for the patronal feast – the day of Elijah the Prophet (August 2).

In the morning, criminologists work in the temple, the abbot said. He also added that there are video cameras inside the church and on the territory. 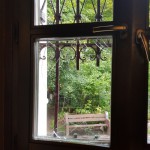