Kiev Patriarchate tries to legitimize the seizure of an Orthodox church

January 6, 2016. Representatives of the so-called Kiev Patriarchate try to legitimize the capture of a church in the village Kolodyanka Zhytomyr region (Ukraine), as the website prochurch.ua reports.

Representatives of the canonical Ukrainian Orthodox Church and the so-called Kiev Patriarchate supporters met with the head of Novograd Volyn regional Administration, to discuss the situation. The non-canonical believers insist on claiming the ownership of the temple. However, no member of the UOC community in the village Kolodyanka moved to Kiev Patriarchate, as Archpriest Valentin said.

“During the time of the capture the community was never registered to them. Actually, in Novograd in Volyn region are only two schismatic communities. Both are located in the district centre”.

According to the Archpriest of the UOC, everything started when members of the Kiev Patriarchate in Novograd of Volyn took with their side the head of the village council and the school director, as supporters. Those people helped to seize the church.

“Now they are trying to establish some kind of parish life and to create an active community”, said archpriest Valentin.

Archpriest Valentin Moroz believes that the schismatics took advantage that the canonical Church had some difficulties with the documents and the funds concerning the construction of the church.

The UOC community consult a lawyer trying to defend their rights and it prepares documents for its property.

Photo document from the Union of the Orthodox Journalistst 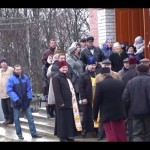