EU investigating charges of destruction of mosaics in Turkish-occupied Cyprus

February 7, 2020. In response to a written statement by Cypriot Euro-Deputy Costas Mavridis denouncing the deliberate abandonment and destruction of the mosaics of the Church of St. Eulalios in Turkish-occupied northern Cyprus, the relevant European Union commission has already taken up the matter, reports the Orthodoxia News Agency.

The commission’s cultural heritage committee has already begun investigating the fate of the mosaics of the church in the Kyrenia district in order to begin preservation work as soon as possible.

Specifically, in his speech to the European Commission, the Cypriot Deputy noted: “In the courtyard of the Church of St. Eulalios in the Kyrenia district, under the military control of Turkey, there are mosaics half-covered with earth and stones which are of great archaeological and religious value. These mosaics are completely unprotected and exposed, resulting in pedestrians and animals as well as cars, including military vehicles of the Turkish occupation army, causing irreparable damage and the destruction of the mosaics.”

In its response, the European Commission states: “Some preliminary work has already been done to preserve the mosaics of the Church of St. Eulalios in Kyrenia. The Ministry of Foreign Affairs of the Republic of Cyprus has sent the Commission clarifications on the ownership status of the affected asset as a prerequisite for carrying out maintenance work. The Technical Committee is already conducting a historical survey on the mosaics in order to start maintenance work as soon as possible.” 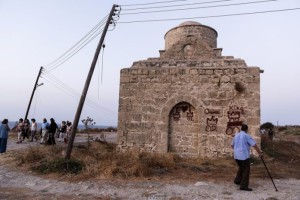