August 10, 2016. Obuhov (Ukraine) city’s mayor Alexandr Levchenko ordered to dismantle a provocative billboard which is likely to be directed against the Russian Orthodox Church, as repors the Union of the Orthodox Journalists.

The billboard was set up by Obuhov “Right Sector” division. It reads as: “The Russian Church is an invader’s weapon. Ukraine must have the Ukrainian Church.”

Alexandr Levchenko was afraid of the protests of pro-Russian old women – now he will be fought back by Ukrainian patriots,” uttered threats nationalists.

Photo document from the Union of the Orthodox Journalists. 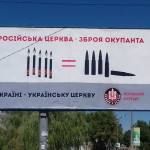