March 29, 2018. Archbishop Eulogius of Sumy and Akhtyrka has sent a letter to Petro Poroshenko.

In his message to the Head of State, the archbishop expressed concern over the intentions of the leadership of the UOC KP to initiate the seizure of the Trinity Cathedral, the Bishop’s seat, reports the press service of the Sumy eparchy on March 29.

“According to a report on the official portal of the Kiev Patriarchate, at the meeting of the UOC KP held on March 23, it was suggested that “the Holy Trinity Cathedral should be returned to the Ukrainian Orthodox Church of the Kiev Patriarchate,” says the official letter sent to the President signed by the rector of the Trinity Cathedral. “This idea caused a wide resonance among Orthodox citizens of Sumy, since this cathedral is the property of the religious community of the Ukrainian Orthodox Church on all legal grounds.”

According to the leadership of the cathedral, at its official event the UOC KP became the initiator of actions, the result of which should be the alienation of church property of the religious organization.

Sumy believers have already called such an initiative a provocation from the leadership of the UOC KP and see it only as an attempt of a hostile takeover of the temple.

Photo document from the press service of the Sumy eparchy 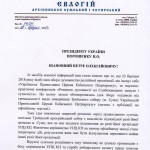