November 27, 2017. Orthodox Christians in Albania were shocked and insulted by a presentation that took place during a recent book fair in the capital city of Tirana. The book that was unveiled, Demons in Cassocks, depicts Albania’s most beloved saint Kosmas of Aetolia, as well as the current primate of the Albanian Orthodox Church Archbishop Anastasios of Tirana, Durrës and All Albania, reports AgionOros.

The Greek TV station ANT1 reports that the book is specifically aimed against the Orthodox Church and the Greeks living in Albania.

The author of Demons in Cassocks Sejdi Kondi is widely known for his nationalist views. He has repeatedly called for the expulsion of Orthodox Greeks from Albania.

Orthodox Christians and Greeks are no strangers to persecution in Albania. Two churches and four houses were attacked by night in the Greek mountain village of Xirovalto in the Pogoni municaplity, near the Greek-Albanian border, 195 miles southwest of Thessaloniki, and other villages, in February. Most recently, the Institute of Cultural Heritage of the Ministry of Culture announced that visitors to several Orthodox churches and monasteries must now pay for entrance. The new rule applies only to Orthodox churches.

In an interview with Greek journalists, Abp. Anatasios described the publication of the controversial book as an attempt “to destroy the harmonious existence of various religions,” and stressed that the attack on Orthodoxy “goes beyond the bounds of blasphemy against sacred ideals.”

The publication of the book has caused a wave of public outrage in both Greece and Albania.

St. Kosmas of Aetolia (1714-1779) is commemorated as an Equal-to-the-Apostles and a hieromartyr. Throughout his several missionary journeys, he founded more than 1,000 educational institutions and halted the Islamization of Albania and Northern Greece.

Albanian nationalists believe the activities of St. Kosmas prevent the creation of a “Greater Albania” and have often launched attacks against the Orthodox saint. 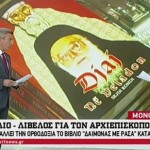