June 6, 2016. A group of Muslims unfolded a banner in front the Greek Orthodox Church in the southern province of Hatay, as reports TornosNews.gr

According to Turkish newspaper ‘Daily Sabah’, the banner read ‘We are celebrating the holy month of Ramadan in all the Islamic world’.

The article in Sabah points out the Church is located in a busy main street in the city of Alexandretta which serves the religious needs of the increasingly dwindling numbers of Christians in the country. 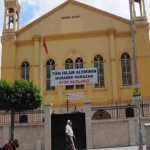