March 7, 2017 – A graffiti in Croatian reading “For home ready” along with pro-Ustasha emblems has been painted on a Serbian Orthodox church in the Croatian town of Sinj.
The Serbian Orthodox Church (SPC) announced this on Tuesday.

The fascist greeting “For home ready” was used by the Ustasha regime of the Independent State of Croatia (NDH) – a Nazi-allied WW2 entity that operated death camps for Serbs, Jews, and Roma.

The graffiti appeared on Monday on the southern wall of the temple that is dedicated to apostles Peter and Paul. The case has been reported to the authorities and an investigation in under way.

This is not the first time that graffiti with similar content have appeared on the building – the last such incident happened in 2010.

The SPC Eparchy of Dalmatia said that this type of offensive graffiti sends a negative message to Serbs in Sinj and beyond, but also speaks to the real situation in society and the position of minority communities in Croatia. 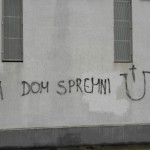